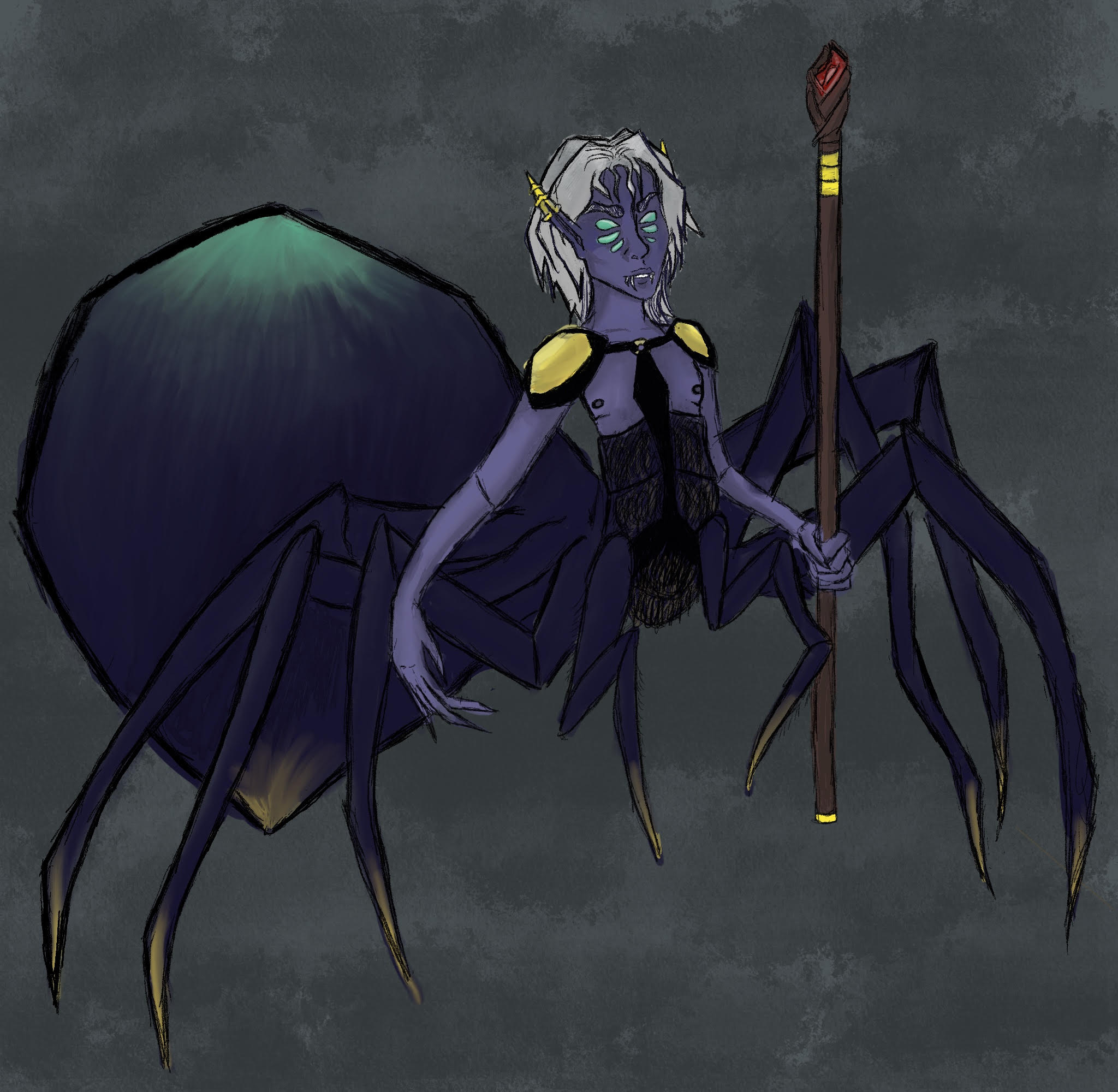 ×
Name: Elendar
Age: 269 (in human years, that’d be mid-30s)
Race: Drow/Drider (depending on where in his life
you focus)
Gender: Trans male
Height: 5’9” as a Drow, about 8’ as a Drider
Class/role: Cleric; Myrlochar and leader of a gang of bandits
Alignment: Chaotic evil

Personality: He’s one part overly entitled bookworm and two parts fear that no one will remember him (or carry on his work). His drive for knowledge and renown often put him in situations where he spirals deeper and deeper into the abyss—which has landed him into following the demonic goddess Lolth to begin with. You might say the guy’s got a bit of a mommy complex, and his worship of her has seemingly given his life purpose. He tends to get the tiny details of his research wrong, however does not tolerate being challenged on it. He is not quick to kill, and instead is intrigued by seeing how much knowledge he can gain from a person before they no longer serve a use to him (including after death). He sees the world in a “survival-of-the-fittest” sort of way and mocks the suffering of others.

Background: Elendar is the self-given name of a drow that’s dedicated his life to sacrificing his body (and the bodies of others) to appease his goddess in hope that she will bless him with power. Elendar was orphaned and raised in a Seldarine cloister, though he found his lot in life lacking to say the least. He found refuge in the temple library to reading complex and obscure texts and became fascinated with the stories of Lolth and her transformation into a half-drow-half-spider creature. And so Elendar, inspired by the renewed sense of power and purpose Lolth bestowed on herself through her transformation, put his past behind him and renounced his faith to become part of her brood.

Elendar went on to become a self-taught cleric of the dark arts in addition to a small-scale tyrant, sacrificing his own body and the bodies of his enemies to appease Lolth. His Drider form is no doubt also thanks to the experiments he’s carried out on the bodies of his enemies to mutate them to have a more spidery appearance. Over decades, his Drider form has progressed--at first his fingers lengthened, then his limbs, until eventually a large abdomen formed where his legs once were with eight slender legs. Elendar views his new body as the ultimate evolution of not only Drow, but all other humanoid creatures, believing it’s the only way to reach true enlightenment and strength. He seeks to carry on his progeny to raise a brood fit for serving Lolth and attempt to summon her to the domain of mortals.